I’ve been experiencing some weird issues on my Macs for a while now, and in the last week I’ve been having serious issues pasting into any JetBrains IDEs while text is selected. After extensive digging around I found a thread on the JetBrains bug tracker which seems to imply PopClip is the cause.

I do have issues with memory usage of the JetBrains tools, paricularly on the Intel Mac, but thought posting here would be a good start,

What happens is I select text (often with the mouse), and then paste. I nearly always get what I pasted twice. So if I copy PopClip, I get PopClipPopClip. CMD+Z allows me to undo one paste. Anecdotally, thus far, excluding PopClip from the JetBrains apps seems to be solving that problem, but I can’t be sure that’s the real issue.

have the same problem.
Spent a lot of time debugging it.

I haven’t heard of this specific double paste bug but Java-based apps do tend to work poorly with PopClip and there have been problems with the JetBrains apps in the past. I’ll need to investiage but it is probably a good idea to exclude JetBrains in PopClip for now.

I’ve excluded them on all my machines. Interestingly, M1 machines no longer seem to have any issues, but my Intel work machine still occasionally double pastes!

Java apps do tend to have this sort of problem occasionally, I’ve been tackling a memory leak issue in it, so I’d be surprised if the culprit really was PopClip, but I also don’t need PopClip in my IDEs so it makes sense to exclude it!

OMG, I am having the same issue and was wondering what the problem was.
Not just double paste, there is another issue that the copy/cut fails and copies like blank. Very annoying

@nick Do you have any idea why java applications have an issue ?

Well they don’t really conform to the macOS platofrm conventions for text controls. Everything in done in a Java-way rather than using standard Cocoa controls. The benefit of that is the apps are highly cross-platform, but the drawback is it’s not Mac-like. And PopClip likes Mac-like stuff.

One particular aspect of PopClip is makes a lot of use of the Accessibiliy API and most Java apps support that little or not at all.

Similarly PopClip is not really all that good friends with FireFox which also does a lot of things its own way.

p.s. welcome to the forum @Moulick and @volos

What would be very handy (especially for this!), is if we could exclude a whole folder of applications from PopClip—those of us who use JetBrains toolbox end up with the app actually installed inside of Application Support in subfolders which are version numbered. If I could exclude the whole folder, I’d never need to worry about a new version of my IDE conflicting with PopClip. Of course, the better solution would be “JetBrains fixes the problems”, but they seem loath to admit there is one. 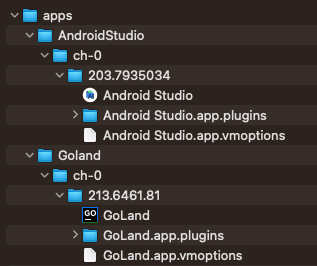 What would be very handy (especially for this!), is if we could exclude a whole folder of applications

Thanks for the idea, I can see the benefit of that … let me give this one some thought.

One thing to note is that the exclusion actuall is based on the bundle ID of the app, not its location on disk, so if you exclude an app, all versions should then be excluded even if they are moved around in different locations.

Oh, that’s really good to know! Then maybe the solution is just for me to write a small script that gets all the apps in that location, though it doesn’t eliminate the problem of “I added another Java based app, why is it being weird? Java!”, but that’s 100% a me issue

As it’s based on the bundle ID, does that mean it works with symlinks? Jetbrains toolbox puts symlinks in your user’s Applications folder, necessitating some digging to find the real apps.

Just a little update on this JetBrains “double paste” problem. A JetBrains developer contacted me and I was able to help him track down what was going wrong. He said they are going to address it from their side, so hopefully we will see a fix in an update.

I don’t think so. I installed Jetbrains via Jetbrains Toolbox and excluded them in PopClip, but it would still pop up in idea and other applications.

Regarding the “double paste” bug, it still is an issue. The bug is in the JetBrains code though, so I can’t fix it myself.

Regarding adding to exclude list, sometimes that app in the Applications folder is just a launcher for another app that actually runs. Can you try holding option (⌥) while clicking the ‘+’ button to add to the exclude list in PopClip, while the app you want to exclude is in the foreground? That should block the actual foreground app.

Yeah, it works by holding the option key to add the apps.

And actually, the path of apps installed by Jetbrains Toolbox is ‘/Users/$USER/Library/Application Support/JetBrains/Toolbox/apps’.