Nick asks: what's your feedback on this in-app purchase?

I’m thinking of adding an in-app purchase to PopClip, and it might look something like this mock-up: 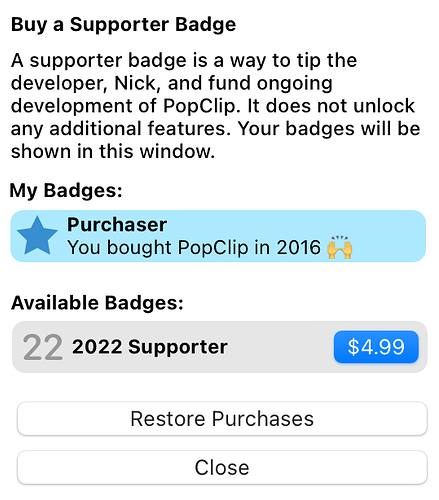 As a user of PopClip seeing this, I’d like to get your response.

Please let me know in the comments.

Background: As you may know PopClip has been developed continuously for nearly 11 years now and never had a paid upgrade. I am often asked by long-time customers if there is a way to pay towards the app. This is my approach to asking customers to financially support the app, without resorting to a subscription or paid upgrades. I’ve not seen any apps do it exactly this way before so I’m curious how it hits to people.

As an aside, I’d rather be working on new features or extensions than adding this, but I’ve been promosing myself I’ll try and be a proper businessman!

Pop-clip is one of the tools I could not live without. I absolutely would support you and I often show pop clip off to friends and on livestreams.

Would the supporter icon show in the actual popup anywhere? Or a link to a ‘support’ function?

Would the supporter icon show in the actual popup anywhere? Or a link to a ‘support’ function?

I’m thinking this would be accessed as a button in the About pane, under the “Rate on App Store” button. Maybe also a pop-up when you start the app inviting you to become a supporter, but only to appear once. I wouldn’t want it to be obtrusive in the way of actually using the thing.

I have two very good examples of apps I like and have implemented something of a Tip Jar. One is BandBreite (for Apple Watch band collectors) and they have a fairly simple approach with a Tip Jar view with two options. The other is Data Jar which is an excellent Shortcuts companion (to store global data) and this developer actually checks how many times you’ve used the tool and then presents a modal to nudge to the Tip Jar. I understand these are both iOS, but maybe they are useful as inspiration.

In my own app I also implemented the ‘over time nudge’, but for App Store reviews nudging. So the App Store review modal would only present itself after 50 app starts. That certainly led to higher praise and better reviews conversion.

I do think 9,99 a little steep for yearly support. $4,99 makes more sense to me (two Starbucks Lattes last time I checked 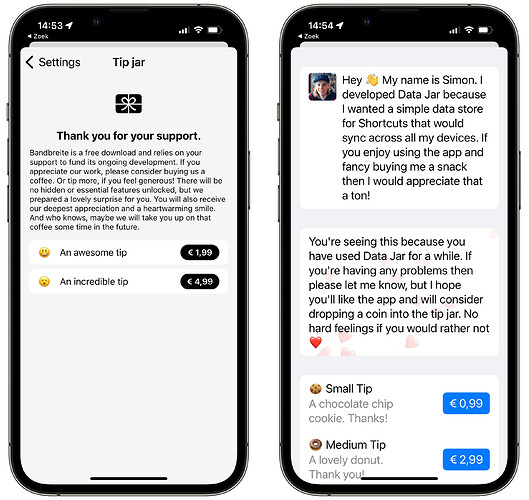 Great suggestions and feedback @JeanPaulH, thank you! I’m with you on apps being smart about when they nudge things. I generally dislike pop-up modals with a great passion.

Ultimately I guess it’s up to me to earn whatever amount I ask by releasing quality app updates and extensions over the year.

Having a couple of tiers also make sense, but I also beleive that multiplicity of choice adds friction to decision making. I could still go either way, but I find myself drawn to the simplicty of a single value proposition, to which the user can decide yay or nay.

Even if nobody else sees it. Yes, I’m different than most. Maybe if you wanted to add it, you could set it up like any other tool and let the user decide if they want to wear the badge and not hide it in some obscure place like the about that nobody sees.

Bless you :). Edit: Maybe rather than in the popup (it seems a bit in your face to me, but everyone has their taste!), there could be a special version of the menu bar icon. But I also don’t want to make this too complicated…

Could find something sensible for receipt ?
“Support contribution”

I like it — some other examples might be Twitterrific (they use a Tip Jar technique), and Apollo (you can unlock, and then there’s a couple more levels above that that add nice-to-haves not necessary for everyday use).

cough would pay to ‘unlock’ the Classic PopClip theme

Ahh well, if glossy gradients and bold text are your thing then there’s no need to pay for that:

(Paste in Terminal, then Quit and restart PopClip.)

Oh, I knew about that trick — I was just trying to come up with an additional revenue avenue for you

Oh… Actually I had a feeling I’d told you that before. Yeah here I am giving away all the best stuff

Yup, that was me on Twitter asking you.
You’re sitting on a gold mine, Nick!

I would pay to support Popclip. It makes my life easier and helps prevent errors – but more importantly, it makes some aspects of my work less monotonous!

This is a great idea! I can pretend it’s a subscription (because I like subscriptions! with all due respect to those who don’t

) and support @nick every year!

A yearly reminder would be cool with me, like on the anniversary date of my in-app purchase if that’s easy to do.

I’m happy to ‘buy you a coffee (tea) or two’ each year to support your work.

I’ve seen a lot of dislike and backlash for subscriptions so the tip option is a nice idea. In app purchases for functionality are basically subscriptions under a different guise. From a business point they are handy to know what you potential income is going to be.

If the main features are there for the initial price then there should be little complaining. Adding a supporters in-app monthly/quarterly/annual would be fine in my book for added bells and whistles.

Whatever you choose don’t let it distract you too much.

I’m in. Appreciate your great and continuous development work.

I’d rather not see it in the pop-up. Real estate there is precious.

It’s a little unclear to me when and where this offer would actually appear. In the About pane of the app? Seems like presenting it once or twice a year would be reasonable.

I think this would be a worthwhile experiment before implementing paid upgrades. I would certainly contribute, because I use PopClip frequently every day and find it indispensable.