I have used the PopClip extension for nvALT for many years, but it doesn’t work now for me on macOS 12.0.1. Could be that the Safari extension itself doesn’t appear to work with this OS as nvALT itself is pretty long in the tooth. If the former functionality itself can’t be reclaimed, I’d sure be interested in a replacement with similar nvALT functionality: No subscription, plain text files, easily searchable, etc. All the things that nvALT was great at for a person with simple needs.

Hi James, welcome to the forum and thanks for posting.

This is a weird one because I occasionally get reports of the nvALT extension not working, but usually it keeps working for me.

1) First of all I’ve also just updated the nvALT extension just now - you might try redownloading it although I don’t expect it will make a difference. I’ve just tidied the code a bit. Give that a try so we are on the same page.

2) Assuming that makes no difference…
The way the extension works is by opening a URL like this:

We can do a test to see if it’s PopClip that’s going wrong or something else. Can you try pasting this command into Terminal:

Does the text “example text” get added as a new nvALT note?
If not, what happens? Is there any error message?

(Regarding alternatives, I guess nvUltra might be the thing!
Though I’ve not had a chance to try it yet.)

Thanks for getting back with me, Nick! I’ve done as you have suggested, and here’s what I have found:

nvALT opens as it should, but neither is a new note created, nor does “example text” appear in the search bar.

In case it helps, I’m enclosing a screenshot of “About This Mac”: 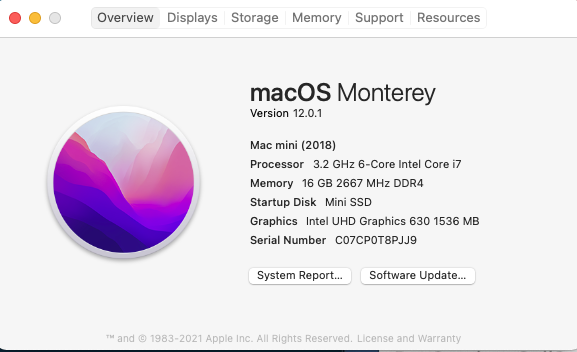 If I can provide additional information that might help, let me know. And thanks so much!

Great work. In a way that’s not good news because if the nvALT isn’t responding to the URL properly from Terminal its unlikely to work from PopClip either…

Is this “open but with no text” the same behaviour you are seeing when using the PopClip extension, or is it different?

Is this “open but with no text” the same behaviour you are seeing when using the PopClip extension, or is it different<<

The same behavior both ways: the app opens, but no new note is created. Perhaps there’s some subtle difference in our setups that explains the difference in behavior we’re seeing on Monterey, but I don’t think that justifies any deep detective work on your part for an app this old.

I’ll have a look at the nvULTRA once it’s available.