PopClip 2021.11 is now available in the on the Mac App Store, and on the website downloads page.

The “what’s new” for this update is:

If PopClip releases had code-names, this one would be called “Iceberg” because there’s not much to see on the surface, but there’s a lot going on underneath. This release also includes big improvements to the system for creating your own extensions, including running Shortcuts on macOS Monterey. Look out for documentation coming soon to the PopClip Extensions GitHub repo, as well as how-to guides on the new PopClip Forum — to which, having read to the bottom of the release notes, you are specially invited. -Nick

That’s the quick summary. There’s lots to unpack with this one, and I will be sharing more info here in the forum.

The keyboard shortcut probably is something you might want to try out. It’s been asked for a lot over the years, but until now there has only been the AppleScript trigger. Have a go with it and let me know how you get on. 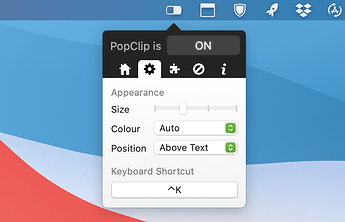 The new keyboard shortcut is going to make the world a much, much better place! Great idea!
Now we can activate PopClip from the keyboard and navigate through the actions with arrow keys… Something I find myself wanting to do pretty much every day.

Thanks for a great update, Nick! The global keyboard shortcut is a particularly welcome addition.

Thanks for your update. That will help me with improvement efficiency.

Thanks for you encouraging comments @ned and welcome to the forum!

Thanks for the update. I’ve honestly never needed the keyboard shortcut, I don’t think, but I will check it out and see how things go. Cheers.

Cheers @kelpie. If nothing else, it can be handy for if you are trying to get PopClip to appear with the mouse and it is refusing.
But mainly it has been asked for by people who prefer to do their text editing with the keyboard. So you can select the text with ⇧+arrows, then activate PopClip, select action with arrow keys, and hit enter – all without taking hands off keyboard.
The keyboard (and AppleScript) trigger also works even when PopClip is turned off, or if the app is in PopClip’s excluded apps list. So it adds a little extra flexibility there too.

Absolutely love the app. Thanks for keeping it updated @nick!

Thank you, we appreciate your work!

The ability to invoke via a keyboard shortcut is fantastic. I didn’t realise how useful it would be…

KB shortcut is just what I wanted for adding timestamps. Thanks!