Guide to using the Keyboard Shortcut trigger in PopClip

What the keyboard shortcut does

It is a global keyboard shortcut that triggers PopClip to appear. Being global means it will be recognised by the system in whatever app you are using.

You can move the highlight between PopClip’s actions with the arrow keys (←→) and then perform the action by pressing either Return (⏎) or Space. Pressing the Esc key will make PopClip disappear without performing any action.

Click “Record Shortcut”, then press whatever key combination you wish to use for triggering PopClip. 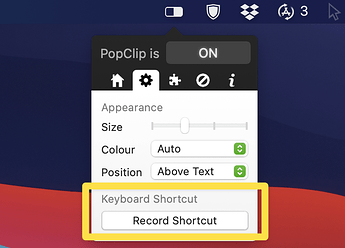 The shortcut must be a combination of one or more of the modifier keys — ⌘ (command), ⌥ (option), ⌃ (control) and ⇧ (shift) — and another key on the keyboard.

Similar to the keyboard shortcut, you can also trigger PopClip to appear with an AppleScript. This allows setting up other kinds of automation or trigger mechanisms (example).

Great, now we can solve the problem of clipboard conflict

Wow. This simple thing has brought me even more utility from PopClip! Thank you!